Spotify, Apple Music and Deezer (SAD) have 100+ million subscribers; that’s $12 billion to cash in every year, but actually they lose millions and artists get peanuts. Yet an alternative model exists, but might not take off because as a company it’s not backed-up by donations, and as a social enterprise it’s not backed-up by investors.

Let’s come back on a 6-year music revolution in progress!

2012 : hitchhiking from Paris to Vietnam while recording music is great source of inspiration

CDs are declining, MySpace is down, Spotify and Deezer exist but stay low-profile. It’s the big time for illegal downloading and home-made music producers thanks to SoundCloud. From my spot in Bristol (UK), as a music producer, I’m programming more and more ‘world music’ artists. The wind’s clearly blowing in the direction for diversity. But I don’t know much of the music world outside the UK or France really. Time for ‘Bustle Around the World’, a 6-month music exploration that will take Ben (my cousin and creator of ‘métrochanteur’, a tube map of musicians playing in Paris’ subway) and I mainly hitchhiking from Paris (France) to Saigon (Vietnam), meeting and recording artists all along the way. 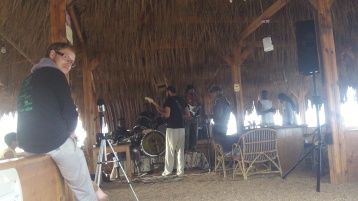 The conclusion is simple: music is bubbling and internet is booming. Let’s put the two and two together.

It’s all well said, but we don’t know how to create a website.

Fortunately a friend of a friend, back dev. in a small start-up & music fan was a bit bored and ready to jump on a crazy project. The 3 of us created a ‘charity’ to give us a bit of structure, and started working on a simple idea: by geolocating music on a map, it would be possible to ‘surf the world in music’ and get that diversity everyone was all about.

To start with a prototype, we’ve used Soundcloud as our music server, synchronising the music on google maps: bustle.eu was born. Happy days, local artists could be visible at a global scale!

We had to accept a bit of a reality shock at that moment.

If my westerners music friends found the concept ‘cool’, streaming was still not yet democratised for listeners. And really, as an artist, should you need to have your music ‘on line’ for demo., well the Berlin based company was doing a great job. I put all my hope of all those musicians we had met during the first tour in the Balkans, Middle-East or Africa. However back in those days if these guys were indeed looking for more visibility, bustle.eu was too ahead of the game for their internet standards.

We were on stoll.

2015 : ‘visibility is key’ said a musician from Suriname, ‘but why do we need visibility for?

To get some fresh ideas, I jumped on the opportunity to sail (yes, yes!) from Europe to South America, and run a second music tour there. During 5 months, on my own on the ground this time, I travelled by the road down the East coast from Georgetown (Guyana) to Buenos Aires (Argentina), scouting for artists, meeting as many people from the music world I could, presenting the platform to everyone I’d bump into.

And here came the answer: ‘visibility is key’ said a musician from Suriname,’because nobody knows we even exist! But why do we need visibility for? To broadcast our music & get bookings, aka to make some revenues.’

The one month it took me to sail back (yeah, why not?) gave me enough time to assess the situation. Apple had just announced they were releasing a ‘streaming music service’, meaning that streaming was or would become massive (Remember: who’s made mp3 become big? Apple and their ipods! So yes, I was again ready to see the brand with an apple leading another music tech. breakthrough.) At the same time Youtube, Spotify and Deezer were paying the artists per click. It was peanuts, but I liked the idea. And with streaming becoming more democratised it could be possible to play on the mass to generate a pot of money enough to create ok revenues for artists with no add. My first thing touching ground on the Channel Islands was to rush to a telephone box and call my friends: ‘I’ve got something; it’s called ‘stream & fund’!’.

Back to work, to upgrade our platform with a stream & found system. Having in mind the bad adventure of Grooveshark, we grew the team up with a specialist in IP law. And having admitted the importance of a built up community to do B2C, we also got a community manager to work with us. No need to mention that everyone was working generously for free evenings and weekends. But boom, November 2015, bustle.eu V2 was on!

It did not take me long to quit my job and gather the team: ‘guys, we’ve got it! Traffic is stable at 300+ visit/month. People are loving our ideas! Look, if we split 60% of the revenues for the artists, and 40% to pay the publishers, the servers and ourselves, we’ll be not rich but ok. The only way to move up: we need time, and money. And a bit of support. Who’s in?’

And believe it or not, 2 of them were crazy enough to say yes! And not the lasts: the developer and the jurist.

Showing how serious we were

Problem: as a charity we could not raise money -other than donation-, nor borrow some. And we had priced a rework of the platform at 4 months worth of 3 people work + 30K € for web-design, plus 3 months to breakeven including a new digital com. specialist, making a total of 80K €.

Our only option really was to set up a limited company (actually ‘SAS’ cause it’s in France), and fuel it with all our savings. 40K €. Showing how serious we were, and how ready we were to take on all financial risk we applied to join the incubator programme of ‘Paris&Co’, Paris’official incubator. And not only did we get selected among the 350 applicants, but also we got a ground of 30K €! I moved back to Paris summer 2016 feeling we were ‘rocking’. And that’s where the fun began.

First we had to set up our own servers and rework the front design trying the arising framework Vue.js. Very cleverly our CTO pushed to code the platform in the cloud, plugging various services (authentication with Auth0, storage & transcoding with AWS) together on Heroku. The idea was to keep a platform as flexible, easy running and low-cost as possible. At the same time we tackled a complicated topic: the legal side. Diffusion, distribution, edition…do we need a three party contract (artists –  bustle –  listener)? If SAD weren’t contracting artists straight away – you had to go through an aggregator-, there were to be a reason. But no. Nothing legally prevent an artist to be distributed directly. However this does not mean that playing the ‘music distributer’ is easy. We eventually -few months after!- set up our ‘web-licence’, and in December 2016 we proudly launch bustlemusic.com, supported by a crowdfunding campaign ran by 2 new team-members in marketing & digital communication. Of course the site was only open for artists at that stage, but with our €10K raised, 2016 was ending well!

Coming back from West Africa in January where I had been prospecting was like heading toward a wall. Only 10 artists had joined. And we were a good 3-4 months before commercial launch, yet we were running out of cash.

No other choice than playing ‘all in’ or stop the adventure

Our bank had been very clear: ‘you guys love music; good on you. But please, don’t ask us for any loan’. We unsuccessfully tried to apply for subventions or competition. Each time the answer was quite the same : ‘Come on! If Spotify loses 200 million a year, what’s the odd for your service to make it. Money should go to projects that have a future’. One of us had inherited of a bit of money; well there were no other choice than playing ‘all in’ or stop the adventure. Strength by 80K €, we took onboard another ‘music person’, in charge of developing the catalogue, and we attacked the next challenge: the payment system.

Indeed collecting money on behalf, and distributing the way you want is HIGHLY regulated to prevent the development of money washing machines. Fortunately ‘marketplaces’ had recently appeared on the web. But none were running ‘immaterial services’ such as ‘use of intellectual property’. To show you how complicated it was, we even asked the French Ministry of Finance. But this was to ‘disruptive’ for them to have a thought on it. I let our CTO work on it while I went to West Africa  again, to nurture our partnership with labs there, and present the project: we received a warm welcome in Ivory Coast. Eventually we found a way through using ‘MangoPay’, and thanks to our good work, in May 2017 more than 50 artists had signed in: we were ready to roll out our fair streaming platform!

Exploration is part of our DNA. So we got two trainees on board, and part of the team set up for a 15-day road trip through France to present Bustle Music to the French music scene and relay our adventure on the social networks. This allowed us to identified few structures which are quite interested to become our future focal points. Laurent Coulondre, one the top French jazz musicians, decided to become our Godfather, new artists were coming up every week, but still there weren’t barely any listeners…and once again cash was running low.

Early July we sit down to take a step back: 80% of people uses playlist on streaming services. So instead of developing new cool features (a social way to interact between artists and listeners, geolocating venues…) we would focus on putting up playlist, while focussing the com. toward influencers and webzines. We de-scoped our ‘Balkan Tour’ – a summer tour in East Europe in partnership with a mobile studio -, and put down our salaries (relax, just for us the 2 founders). And I would be looking for Business Angels and donations.

The influencer thing went nowhere, but the dev. went fine: now every week you’ve got a new playlist taking you through the world in music!

As for the money, Business Angels had the usual same answer ‘Music? Solidarity? Whouahah! Come on; I’m a real business man’, and Foundation went ‘Very sorry guys, but you’re a company. We only donate to charities’.

So here we are.

For 4€/month, you can enjoy a unique catalogue of artists we’ve been scouting through the world, laid out every week on our playlists.

At the end of each month, 60% goes very transparently to the artists, proportionally to how much they’ve been listened.

Yet we need 200 people to take their subscription to start raising money, and 81 264 to breakeven.

We still have lots of ideas for new features (offline, user experience, geolocating labels and venues…), but we cannot count on the public sector, on banks nor investors.

We can only count on you, to carry on our fair revolution of music streaming!

View all posts by Bustle Music